Considering he is the leader of a party which defines Britishness, in part, as “courtesy/politness/manners”, the recent outburst of UK Independence Party leader Nigel Farage in the European Parliament was extraordinary.

Little of interest usually happens in the European Parliament but Farage’s remarks were widely reported. Addressing the newly appointed President of the European Council, Herman van Rompuy, Farage said “I don’t want to be rude, but you know, really, you have the charisma of a damp rag and the appearance of a low grade bank clerk”. Farage wasn’t finished. “The question that I want to ask”, he continued, “and that we are all going to ask is: who are you? I had never heard of you; nobody in Europe had ever heard of you. I would like to ask you, Mr President: who voted for you? And what mechanism – I know democracy is not popular with you lot – what mechanism do the peoples of Europe have to remove you? Is this European democracy? Sir, you have no legitimacy in this job at all, and I can say with confidence that I can speak on behalf of the majority of the British people in saying: we do not know you, we do not want you, and the sooner you are put out to grass, the better.” He rounded off by branding Belgium, where van Rompuy comes from, “pretty much a non-country”.

There were calls for Farage’s suspension as an MEP, some even branded him “racist”. But there was actually more truth than racism in Farage’s remarks.

Janet Street Porter branded Farage a “racist” on Question Time the following day for his “non country” remark. As usual, she was talking rubbish. How, after all, is it possible to be racist against a group of people, like the Belgians, who arent a race? Besides, Farage’s description has some truth in it. Belgium is a shotgun marriage of other peoples convenience of French speaking Walloons in the south and Dutch speaking Flemish in the north, welded together by the European powers in the 1830’s so that ports like Antwerp and the lower Rhine wouldnt fall into French hands. The two groups have so little in common that in 2007 Belgium had no government for over six months as the two communities couldn’t find enough to agree on.

Farage’s attack on van Rompuy’s non existent democratic mandate is also justified. We are Europeans. We now have a President. Not one of us voted for him. We cant get rid of him.

Farage had a strong case on the non democratic lash up that was van Rompuy’s appointment but he spoiled it with his silly remarks about wet rags and bank clerks. The rest was undoubtedly pretty strong stuff but, as Barry Goldwater famously said, “extremism in the defense of liberty is no vice. And…moderation in the pursuit of justice is no virtue”. 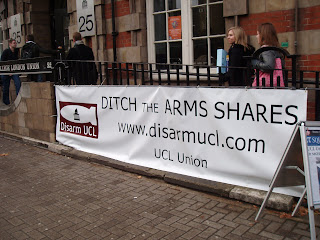 The government is looking for cuts to control a national debt rising at £5,000 per second. In December it found them when it reduced universities annual funding by £400 million. So it might seem like an odd time to be cutting off funding options.

Nevertheless this is what several ‘Ethical Investment’ groups are trying to do. Instead of simply looking for the best return on investment universities are now being pressured, as Queen Mary’s Ethical Investment Policy says, “to consider the social and environmental policies of companies”. So, for example, arms companies are out. In November, after a lengthy campaign, UCL sold its shares in arms manufacturer Cobham Plc whose share price had risen from 167.2p in June to 233.4p by November. It has since risen to 250.9p. Queen Mary’s has likewise adopted an ethical investment policy.

But this does leave the question of where the money is going to come from.

More government funding is out. Government debt has risen from 29% of GDP in 2002 to 37% in 2007 (when the credit crunch started) to 60% today. It is forecast to rise to nearly 80% in the next couple of years. By 2013 9p in every £1 paid in tax will be spent simply on paying interest on this debt. The taxpayer teat has been milked dry.

So do we ask students to pay more for the education they receive? Its estimated to cost a university, on average, about £10,000 per year to educate an undergraduate but any proposal to raise fees is controversial. The London Student website currently carries a photo of a student wearing a placard reading “No fees please” which is a bit like sitting down to eat in a restaurant wearing a sign saying “No bill please”. A recent proposal from the think tank Policy Exchange to raise tuition fees provoked a furious response from the University and College Union and the National Union of Students.

Of course universities should not be investing in companies engaged in criminal activity. But as the arms trade has been singled out as a target so far it is worth noting that most people are killed not with high tech weapons but with cheap weapons like the machetes which hacked so many to death in Rwanda.

But with the government’s pockets empty and students unwilling to pay more, the coming gap in university funding requires that some serious thought goes into cutting off potential revenue streams.

Sarah Palin is the most divisive figure in American politics. 46% of Americans view her favourably while 46% view her unfavourably. 80% of Republicans have a positive view of her while 70% of Democrats have a negative one. Only 8% don’t care either way.

It is difficult to see where these feelings come from. An October 2007 Newsweek profile of Palin and Janet Napolitano, the Democrat governor of Arizona, said “(G)overnors like Napolitano, 49, and Palin, 43, are making their mark with a pragmatic, postpartisan approach to solving problems, a style that works especially well with the large numbers of independent voters in their respective states”. It continued “In Alaska Palin is challenging the dominant, sometimes corrupting, role of oil companies in the state’s political culture…Although she has been in office less than a year, Palin, too, earns high marks from lawmakers on the other side of the aisle”.

Palin’s popularity stems from the fact that she is like a lot of Americans. Like 76% Americans Palin is a Christian. Like 43% Palin supports the right to bear arms. Like 12.5 million Americans Palin goes hunting. Like 51% Palin opposes same sex marriage. Like 82.5 million American women Palin is a mother. Like 40% of children born in US, Palin’s grandson was born to an unmarried mother.

Palin resonates in other ways. In a recent speech to the TEA (Taxed Enough Already) Party movement she claimed “America is ready for another revolution”. This might sound odd considering Americans voted for ‘change’ in 2008 but they have seen very little of it.

Americans seeking change are now looking elsewhere. In November the Democrat governors of Virginia and New Jersey were ousted by Republicans. January saw a Republican elected to the Senate by solidly Democratic Massachusetts. Obama’s approval rating has slumped from 68% to 49%. A recent poll put Obama on 44% against a hypothetical Republican candidate on 42% in 2012. At 11%, just three percent behind the Republican favourite for the 2012 nomination, Mitt Romney, the Pitbull may yet have a run at the White House.

Error: Twitter did not respond. Please wait a few minutes and refresh this page.