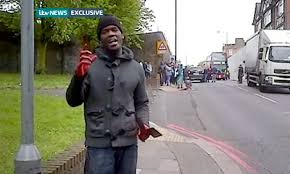 You may or may not remember Norman Tebbit’s old cricket test. Back in 1990 Tebbit told the Los Angeles Times “A large proportion of Britain’s Asian population fail to pass the cricket test. Which side do they cheer for? It’s an interesting test. Are you still harking back to where you came from or where you are?”

Yesterday a British soldier was literally butchered in the streets of London in broad daylight. The man who probably did it, who reports suggest was brought up in Britain, was filmed, still covered in the victims blood, saying

“The only reason we have killed this man today is because Muslims are dying daily by British soldiers.

“And this British soldier is one. It is an eye for an eye and a tooth for a tooth.

“By Allah, we swear by the almighty Allah we will never stop fighting you until you leave us alone.

“So what if we want to live by the Sharia in Muslim lands? Why does that mean you must follow us and chase us and call us extremists and kill us?

“Rather you lot are extreme. You are the ones that when you drop a bomb you think it hits one person?

“Or rather your bomb wipes out a whole family?

“This is the reality. By Allah if I saw your mother today with a buggy I would help her up the stairs. This is my nature…

“Through many passages in the (Arabic) Koran we must fight them as they fight us.

“An eye for an eye, a tooth for a tooth.

“I apologise that women had to witness this today but in our lands women have to see the same.

“You people will never be safe. Remove your governments, they don’t care about you.

“You think David Cameron is going to get caught in the street when we start busting our guns?

“You think politicians are going to die?

“No, it’s going to be the average guy, like you and your children.

“So get rid of them. Tell them to bring our troops back so can all live in peace.

“So leave our lands and we can all live in peace.

“Allah’s peace and blessings be upon you.”

The chap wasn’t Asian but it certainly seems as though he considered himself ‘other’ than British. Seems old Norm might not have been quite so crackers after all.

Error: Twitter did not respond. Please wait a few minutes and refresh this page.